It’s not happened before.  It has often been expected, but the springs haven’t been, for many years, this complicated: summer for a week, suntan, breakfast outdoors, then … winter.  OK, I was expecting the forecast snow, but no clouds formed, stars glittered, temperature fell.  And this morning the astonishing display on the magnolias, the best ever, is no more.

The two trees, both supposedly the variety ‘Susan’, must be fifteen or sixteen years old.  They were leftovers of young ones from an avenue I’d designed for the bottom walk of a client’s walled garden.  The remnants got heeled in here, higgledy-piggledy, rather forgotten, until they began to flower two or three years later.  We fell in love with them, and so they remained, grew, hosted the rose Ispahan, which had decided it was a climber, clematises, and more.  Branches hang over the high wall, and into the cobbled lane down to the fields.

And the avenue?  It should have been looking enchanting.  The client, impatient for flowers, chopped them down.  Perhaps not as overwhelming as the magnolias that arch over the steps up from the Jousting Green at Dartington Hall, but fun nevertheless.  Ah well…

So far, the magnolias’ flowers seem the only casualty.  The apple blossom, buds still tiny and crimson, seems ok.  By the lower pool even the weird, vastly veined, and just unfurling leaves of Rogersia tabularis seem fine too, though the first ones usually get killed by late frosts.  A new fern, Dryopteris labordei, with golden leaves, and which we had planted next to a stand of narrow arching and equally golden leaves of ‘Bowles Golden’ carex, looks mortally offended. Also, ah well… 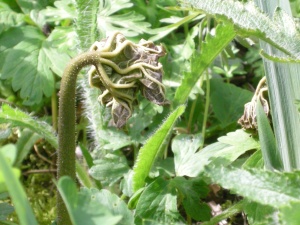 Still, the cold snap can’t last for too long.  I hope not anyway, for a blackbird couple have furnished a nest on top of the wood pile, and there are only half a dozen logs we can now remove without destablising the whole thing and causing the nest’s ruination.

garden writer and journalist, and occasionally a designer, with a garden in the Scottish borders, and his pal's gardens in Edinburgh, London, and Lincolnshire. They keep both of us very, very busy. Books I've written listed on my website, and dozens of articles and garden and plant pictures. Currently working on several new projects. One of these was to return to painting - see the blog - and which is proving exciting! www.david-stuart.co.uk or, more fun, have a look at www.pinterest.com/davidcstuart
View all posts by david stuart →
This entry was posted in Uncategorized and tagged Dartington Hall, Dryopteris labordei, late frosts, Magnolia 'Susan', Rogersia tabularis. Bookmark the permalink.